Manet Painting That Was Presumed Lost Has Been Found

Art Discovery The French painter Manet was an admirer of Frans Hals and painted a copy of his “Regentesses” in Haarlem in 1872. That painting, which was long presumed lost, has been found again in Italy and is now on display in the Frans Hals Museum.

Manet’s handkerchief-sized copy of Frans Hals’ “Regentesses”, 1872. From the collection of the Frans Hals Museum

The Frans Hals Museum in Haarlem has recovered a painting by the French artist Édouard Manet that was presumed lost. The discovery concerns a reproduction of the famous painting The Regentesses of the Old Men’s Alms House (1664) by Frans Hals. Manet likely copied this work on-site during his visit to the Stedelijk Museum in Haarlem on June 26, 1872. 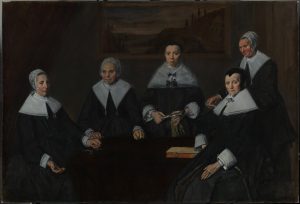 Curator and Head of Collections, Marrigje Rikken, has been preparing for this exposition since the end of 2014 and read about the existence of the Manet copy during the course of her research. A footnote in the Frans Hals Museum’s 2006 collection catalogue mentions the work, which was believed to be held in a private collection in Rome. “Thus, we were aware of the copy’s existence, but nobody knew what it looked like or where exactly it was located”, said Rikken.

For three years, Rikken searched in vain for the Manet, which she desperately wanted to include in her exhibit. She spoke with museums, private collectors and art experts in Rome, but no one knew of the work. In fact, the curator had already given up hope when the museum received an e-mail on Feb. 20 of this year. In it, an Italian art historian explained that she was doing research on behalf of a private collector on a Manet painting that he had recently purchased: a copy of the Regentesses by Frans Hals. She wanted to know if the museum could help provide more information about it.

“So, in the end, the painting found me”, says Rikken.  “I thought that perhaps word had gotten around in Italian art circles that I was doing research for this exhibition and that the painting’s current owner wound up finding me through the grapevine, but he knew nothing about it. It was a total coincidence which happened at the most auspicious moment, as it was just in time for us to still include the painting in the exhibition.”

According to the Italian researcher, Claudia Pino, there is no doubt about the authenticity of the Manet, which she subjected to infrared and x-ray analysis. She suspects that the piece was painted during Manet’s second visit to the Netherlands in 1872. Indeed, Rikken found Manet’s name in the Frans Hals Museum’s visitors’ books from that year.

Measuring just 46 x 32 centimeters (approximately 18 x 12.5 inches), Manet’s painting is several times smaller than Frans Hals’ original, which measures around 170 x 250 centimeters (approximately 70 x 98.5 inches).  “The copy is just slightly larger than the size of a handkerchief”, says Rikken. “I think that Manet wanted it to take home as a souvenir, to be able to enjoy it from the comfort of his own home. It is actually a sketch with unfinished elements. There is very little detail in the hands of the regentesses, for example.”

In the trunk of a Porsche

The first encounter with the long sought-after painting took place last spring in a spa in Tuscany, at the vacation resort of the Italian owner, who wishes to remain anonymous. “It was not a very common place to inspect a painting, in the breakfast room by the swimming pool. The piece was brought there by the owner’s advisor in the trunk of his Porsche. The collector had only just acquired the Manet. I was able to tell him a lot about Hals’ work, which he found interesting.”

Beginning Saturday, Manet’s copy, which Rikken has gotten on loan, will be displayed in the same space as the original Regentesses by Frans Hals. The museum would not like to begin conducting further technical research on the Manet, such as pigment analysis. “This piece is extremely interesting to us because it can tell us more about the Regentesses by Frans Hals. The original has been extensively restored and examined over the last four years. As a result of that research, for example, we discovered that the color of the tablecloth has changed over course of the centuries. It must have once been green instead of brown, but exactly how green, we can still only speculate. This Manet provides us with information about how Hals’ work appeared in the nineteenth century. It is a sort of eyewitness account.”

The museum would like to acquire the painting, as it reveals a great deal about what it was that artists appreciated so much about Hals. Concerning the value of the work, Rikken doesn’t dare to venture a guess. “It is not a typical Manet since it is painted in the style of Hals. For a museum or an individual collector wanting to purchase a Manet, this piece is not a very logical choice. But for us this piece is extremely special. We don’t know of any other exact replica of Hals’ work by Manet.”

The exhibit Frans Hals and the Moderns is on display from Oct. 13 to Feb. 24 at the Frans Hals Museum in Haarlem. For more information visit: www.franshalsmuseum.nl

Join today to receive the latest updates on current Dutch language research and publications across the social sciences and humanities, as well as in popular media, made accessible in English translation to a global audience!

You have Successfully Subscribed!

Whether in academia, cultural and research institutions, non-profits & NGOs, governmental and intergovernmental organizations, news and other media, or beyond, the Translation Salon’s comprehensive range of Dutch to English translation and non-native English editing, proofreading, revision and other services have you covered!

Copyright © 2018 The Translation Salon. All rights reserved. Proudly designed and developed by ThatPix.com.